A 20 year old  boy is murdered. He is shot and killed in a local salon in Mørkhøjvej Brønshøj. The salon faces Nørre Gymnasium high school-one of Copenhagen’s largest secondary schools that offers both the Danish and international curriculum. The 20 year old works in the saloon and this incident happens when he was about to cut the customers’ hair . On this doomful day, several witnesses that include neighbors and students from the secondary   school allege that they had heard sounds of shots being fired . The head of department for organized crime at the Copenhagen police goes ahead to confirm that one man wearing a mask had entered the saloon looked into the 20 year old boys’ face and then fired several shots at him. The perpetrator then fled on foot from the hair saloon. The police is not sure whether he fled further in the car or other ways but of course investigations are being conducted.

Will I still feel safe in my town?

To take you back , on September .23rd.2018, on this same blog I had expressed my fears  when through my kitchen window I had seen the police fastening my entire neighborhood with crime scene tapes ,dogs designed with led lights, heavily armed men wondering around and warning people to stay in their homes. This came after some one was mercilessly stabbed and killed not so far from my apartment…——https://brendaeunice.com/2018/09/23/will-i-still-feel-safe-to-live-in-my-ideal-town/

With my then 3 year old girl, I securely tightened her on my chest with a baby wrapper I had bought from a famous baby shop called Babysam which is located in many parts of Denmark.  I should keep my child close to me because I couldn’t put myself in a line of believing that even rich western countries could inhabit ruthless humans who take no chances in ending other peoples lives. In a country where I come from Uganda, mostly people kill each other to uplift their financial status. I deeply wondered if this was a safe place for me to live and also raise my girl child from. I would not want her to go to bed each day worried of someone attacking her whilst she sleeps(night mare world), I would not want her to be scared of playing in the beautiful nature around us because she is afraid some horrible stranger will suddenly jump from the lawn and attack her and lastly her being scared of going with me to the basement to make laundry perhaps she will be afraid of each and every footstep down in the basement.

Thoughts of despair are running through my mind on this fateful evening. Will I still safe in a town  that I first thought was ideal for me?. Will I still  feel my freedom in a state I believed would protect me from different atrocities?. These are all unanswered queries racing through my mind right about now. Around an hour ago, I had taken an evening walk with my now 5 year old girl- as it is a norm for her to have evening walks before taking refugee in the slumber land. We had passed by the saloon where the shooting took place and the mood was sombre. Young people of the the same age with now the deceased were seen crying and mourning for their gone friend. They light up the scene place with candles, flowers being laid and tons of messages enclosed in envelopes- the mood is awful!. Families of the deceased stood aside with their heads sunk in their chests. The police and different media companies stare grievously. 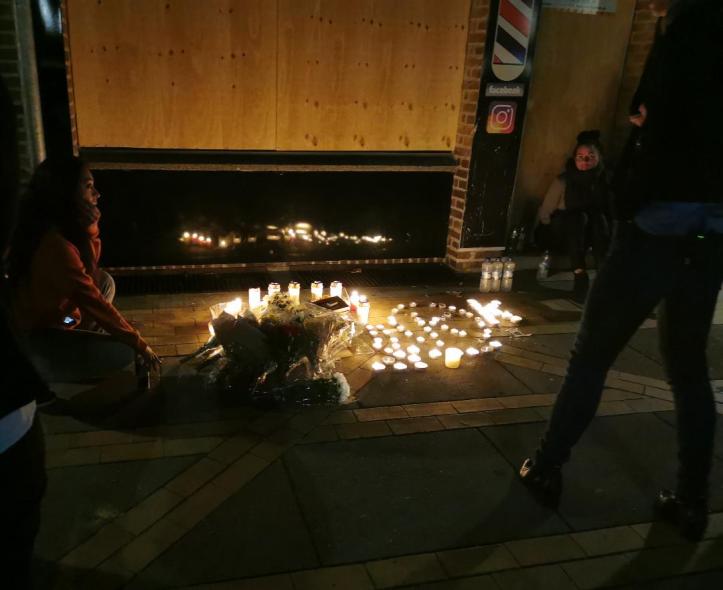 I then learn that Police is so much interested in hearing from witnesses who could have seen something in connection with the shooting. You can reach them on 114 or visit their mobile station on mørkhojvej 67 . Bonded together we can safe guard our neighborhoods and make them appealing and safe places to live in. So don’t hesitate to reach them because We all need a free safe peaceful world .

FOR SURE ONE THING WE SHOULD ALL BE KEEN WITH- WE ALL HAVE TO BE CAREFUL WITH THE PEOPLE WE BRING IN LIVES.